Designed by the world famous architect Harry Colt in 1924 and laid out on what was Brancepeth Castle Deer Park, the stables and coach house being converted into the clubhouse. Harry Colt was involved in designing or redesigning over 300 courses around the world, including Moor Park, Royal Lytham & St. Annes and Wentworth.

Brancepeth is a beautiful parkland course of 6400 yards, SSS 71, offering a great variation of holes. The deep ravine cutting through the course, provides some challenging tee shots.

Our History - The Boar 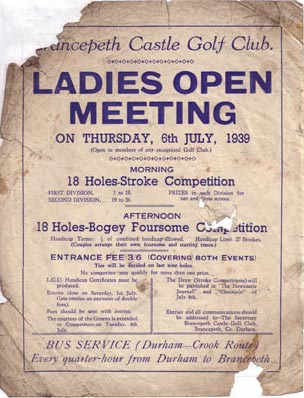 At what time the Brawn, or Boar ceased to exist as a wild animal in Britain is uncertain but it was at one time a common inhabitant of our British forests and was protected by law in the tenth and eleventh centuries. The village of Brancepeth (which may be a corruption of Brawn's Path) is said to have derived its name from a formidable Boar of vast size, which made its lair on Brandon Hill and walked the forests in ancient times and was a terror to all the inhabitants from the Wear to the Gaunless.

"He feared not ye loute with his staffe, ne yet for ye knyghte in hys mayle, he cared no more for ye monke with his boke than ye fyendis in deep Croix Dale"

According to tradition, Hodge of Ferry after carefully marking the Boar's track near Cleves Cross, dug a pitfall slightly covered with boughs and turfs and then luring on his victim bv some bait to the treacherous spot stood armed with his good sword, across the pitfall. At - length the gallant brute came trotting on his onward path and seeing the passage barred, rushed head long on the vile pitfall to meet his death. 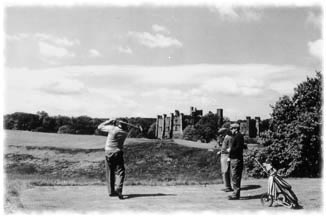 It is generally believed that this champion of Cleves sleeps in Merrington Churchyard, beneath a coffin shaped stone, rudely sculptured with the instruments of victory - a sword and a spade on each side of a cross.

The Stockley Beck which crosses the 9th, 10th, 18th and 2nd holes on the course is approximately the line between the Boar's lair on Brandon Hill and Cleves Cross.

Our History - The Club 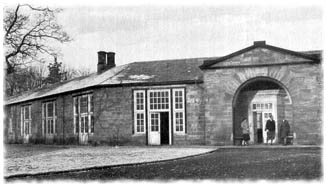 In 1923 Lord Boyne, acting on a suggestion from his agent Major J. K Crawley and solicitor K. C. Bayley, made a decision to lay out a golf course on what was Brancepeth Castle Deer Park. The total amount of land designated was 140 acres, 3 roods and 24 perches where 1 Rood = 1/4 of an acre, 1 Perch = 51/2 sq. yards. The total area was therefore 140.80 acres and the length of the course 6210 yards. The architects engaged to design and lay down the golf course were H S Colt and his partner Major J S F Morrison, considered by many to be the leading architects of the day. The cost to Lord Boyne, including the conversion of the stables and the coach houses for use as a Club House was £10,000. 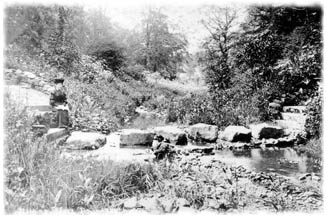 The course was run as a private concern until 1929 when an agreement was made to lease the golf course and premises at a modest rent. In the 1930's the Club prospered and had around 400 members including Leonard Crawley (English Close Champion 1931) and many more prominent Durham County Golfers. It has been and still is the venue for many county and inter-county events.

After the 1939-45 war Lord Boyne's executors sold Brancepeth estates to the Duke of Westminster and after the death of the latter in 1953 the estate was again sold to help pay heavy death duties. At that time the lease on the golf course came to an end and the future of the Club was uncertain. 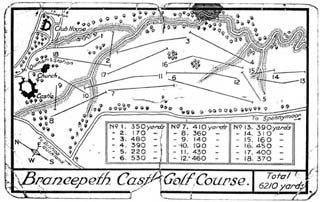 In 1961, Club members subscribed almost £14,500, enough to buy the course and the Club House. Since that date the policy has been to stay as close to the Colt design and layout as possible and the course, generally speaking, has changed very little. The Club now has a full membership and is in a sound financial position. The future is assured and efforts continue, to be made to improve the condition of the course and the Club House amenities.

The Club House is built from natural stone hewn at Littleburn Quarry some two miles away and is entered by passing through an archway and crossing the original cobblestone court with its stone centrepiece, originally used as a watering trough for horses. 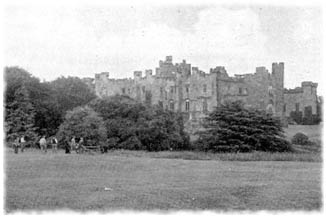 Leaving the Club House and walking down the path towards the first tee provides a first glimpse of the Castle and St. Brandon's Church. Going through the gate and on to the first tee gives an immediate impression of the character of the course and its magnificent deciduous trees. The silver birch trees (Betula Jacquamonti) on the right between the lst fairway and 18th green were planted to mark the Queen's Silver Jubilee. Originally there were 25 trees, one for each year of her reign and they were planted by members of the Club who had been members for over 25 years.

Our History - The Village 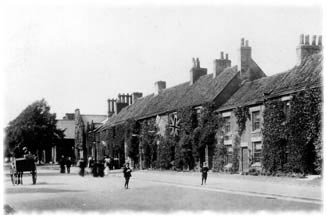 The exact origins of Brancepeth are unknown but the Saxons recorded that a big house was established in the village. It may date back to Roman times as there is a Roman Road passing through the Parish on the North side of the village above Quarry Hill.

One certainty is that the first recorded Rector of the village was a monk from Durham called Haeming whose signature dates back to 1085. The origin of the village name has down the years been the subject of discussion, debate and argument. Some believe it relates to "Brandon's path" and refers to the route taken by St. Brandon to what became known as his shrine and which today is the village church, named after him. Others prefer to believe it is associated with the "Braunspath," the braun being the wild boar that roamed freely in the area at that time and the path being the route from its lair on Brandon Hill to the River Wear. It is doubtful whether the true origin will ever be confirmed but the Golf Club has adopted the latter by displaying the Boar as its club motif.

Brancepeth Castle and estates have been the home of many well-known Durham County families. The Bulmers who occupied the "Great House" during Saxon times were succeeded by the Nevilles (of Nevilles Cross fame) in 1174 when Geoffrey Dc Neville married Emma Bulmer the daughter of Bertram thus transferring the estate from Saxon to Norman ownership. 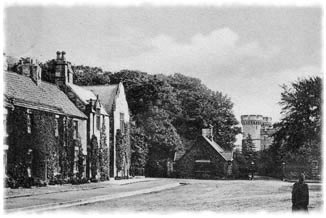 The Nevilles remained until Elizabethan times when the castle and estates where sequestered by Elizabeth following an unsuccessful uprising in support of a plot to effect a marriage between Mary Queen of Scots and the Duke of Norfolk who was the brother in law of Charles Neville.

The estates were then run by Crown Commissioners and in 1569 a survey commissioned by the Queen of the village and estates records that they were "very plentyful of all things, the soyle, good and bountifull of corne and gresse, well replenished with woods and timber'.

The Castle buylded of stone with two ward and toueres with leade and ys of no greate strengthe, it standeth in playne country between two parkes and on the South of a village which ys buylded all in lengthe in one streete"

The estate was managed by various people for the (town until the I830's when it passed again into private ownership. After passing through numerous hands it was purchased by the, Russels whose name is associated with the pensioners cottages in the village built by the Russel Trust Where Derek Carver lived after retiring from the Golf Club. They ran the estate until 1850 when the then William Russel died a bachelor and left his estate to his sister Emma Maria who was married to a Boyne.

The Boynes Occupied the Castle through to the First World War when it was used as a hospital and over 4000 casualties were treated. The Golf course was established by Lord Boyne in 1924 at a cost of £10,000 and leased to the membership in 1929. It was sold to the members in 1961. 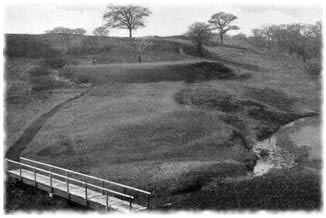 In the mid 60s the estate houses and village land where sold by the Duke of Westminster and that was the beginning of the development that has made the village what it is today.

It has been established that the village Church of St Brandon's has been in existence for over 900 years and recent evidence since the tragic fire indicates that it may date back to Saxon times. It has been the centre of worship for landowners, estate workers and parishioners alike since. The recent fire not only destroyed the church but centuries of religious and historical artefacts which are irreplaceable and lost forever.

The church recently described by English Heritage as the most important church North of York will be rebuilt not to its former glory but as close as is humanly possible. Restoration plans are underway and fund raising very active and surely everyone who knows the church will wish to contribute however minutely in restoring such a wonderful piece of English Religious Heritage.

Each is true in its own way and many more come to mind too numerous to record in this short narrative.

The modern village as we see it today has evolved since the sale of houses and land in the 60s. Modern housing has been blended with the existing main street in such a way as to retain its essential country style. Development has been carefully controlled by the planners and only "in fill" building can now take place thus preserving the rural ambience of the village.

Down the centuries the castle and estate has been the main employer of the village people. This is a far cry from today where residents commute all over the country to as far as London in the South and Edinburgh in the North and retain their family homes in the village having no wish to leave.

The attractions of the village, the Castle, the Church, the setting and by no means least the Golf Club make it a special place. About 28 families in the village are members in one form or another of the Golf Club thus continuing the established relationship between the Club and The Village.

The village provides an attractive approach to the Golf Course and there are wonderful views of the Castle and Church which can only be seen from the course.

The community is proud to have a prestigious Golf Club within its boundaries and the Golf Club is proud to have the name of Brancepeth associated with it, along with the history attached to it. The Golf Course is located in a unique, Picturesque and historical setting.